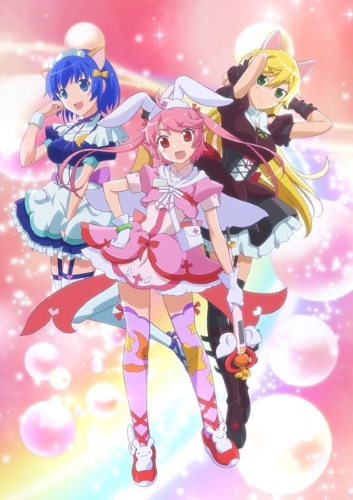 Plot Summary: The new "slapstick" story will depict Komugi-chan and her rivals as they juggle their daily lives as students, idols, and magical girls "with laughter and tears." Komugi Yoshida is a somewhat clumsy second-year middle-school student whose strong point is her spiritedness. She performs as an idol like Kokona Saionji (her classmate and close friend) and Tsubasa Kisaragi (an idol who dresses in male clothing). However, unlike Kokona whose popularity is skyrocketing and Tsubasa with her charisma in male attire, Komugi's only gigs are low-end ones like those at the local shopping district. Still, Komugi has her "dream" as she lives her dual lives as a idol and a middle school girl. One day, a mysterious injured creature named Usa-P appears before Komugi. Komugi gives Usa-P medical treatment, and Usa-P, in consideration of Komugi's kindness, asks if she wants to be a Legendary Girl who can use magical powers. Having become a reluctant Legendary Girl, Komugi battles strange masked figures who suddenly appear! As a newly deemed Magical Nurse, she fights still more waves of masked figures. Meanwhile, a Magical Maid, a Magical Sister, and more also appear to make it a three-way battle!? Can Komugi handle the three roles of middle school girl, idol, and Magical Nurse? And, what lies ahead in these battles and her "dream"...?!